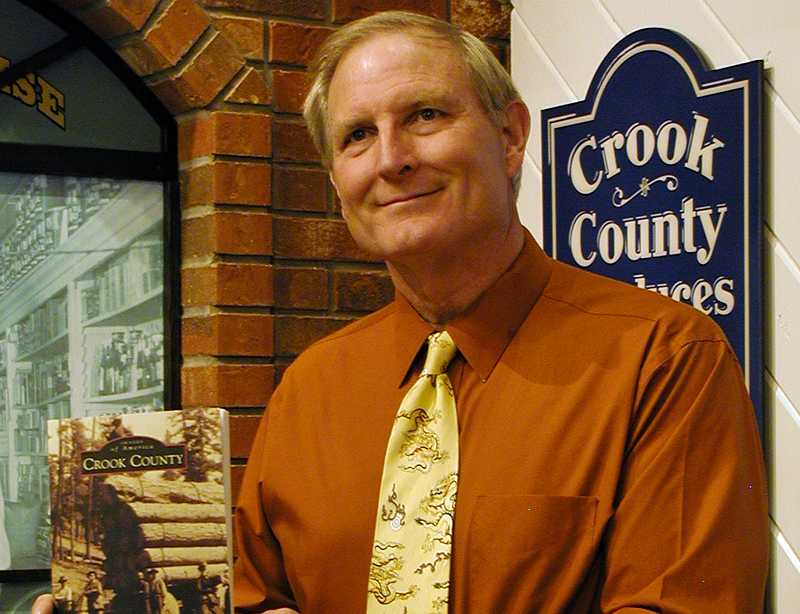 The People from our Past Series has been temporarily suspended for March due to unforeseen circumstance.

Bowman Museum's impromptu Tuesdays Lectures Series will be hosted by Steve Lent, historian at the Bowman Museum in Prineville. 246 North Main Street Prineville, Oregon 97754. This event is free and open to the public.

March 17 – The Rise of the Timber Industry in Central Oregon

March 24 – The Rise of the Livestock Industry in Central Oregon

This presentation provides a photo graphic history and narrative of the last great railroad war in the United States. In 1909 James J. Hill of the Great Northern railroad and Edward H. Harriman of the Northern Pacific Railroad decided to push their respective railroads into Central Oregon. Because of their huge egos they decided to stage a race with the spoils to go to the first railroad to arrive at Bend. The two railroads blasted their way up the Deschutes River from the Columbia. Each side frequently sabotaged the other as they raced construction up the canyon.

In a very expensive and wasteful effort the two railroads built parallel lines on each side of the Deschutes River until they reached Trout Creek. Hill’s Oregon Trunk line continued along the Deschutes to near Warm Springs then up Willow Creek to Madras. Harriman’s Deschutes Railroad went up Trout Creek to Gateway and then into Madras. The obstacle that eliminated joint railroads arriving into Bend was the Crooked River Gorge. Hill had obtained the right of way at the narrowest portion of the Crooked River Gorge and it was too cost prohibitive to build two massive bridges so it was a joint effort from Crooked River Gorge to Bend.

Steve Lent, historian at the Bowman Museum in Prineville, presents the tale of the Hill versus Harriman saga. Numerous vintage photos illustrate the expensive and hotly contested construction.

The Rise of the Timber Industry in Central Oregon

The early settlement era of Central Oregon experienced an initial sawmill boom as homesteaders and early ranchers needed lumber to build homes. Most mills were set up to cater to local needs. Mills were either operated by steam or water power and had limited production capabilities. Hundreds of small mills became established throughout the region.

Big timber operations in the Midwest began to accumulate large timber holdings throughout Central Oregon by the turn of the 20th Century. Unfortunately there were limited opportunities to export milled lumber as transportation was mostly wagon traffic. The arrival of the railroads into Bend in 1911 led to large scale logging and milling operations in the region. Huge mills were built
in Bend on both sides of the Deschutes River with large corporations Brooks/Scanlon and Shevlin/Hixon becoming major lumber producers.

The economy of Central Oregon boomed with the arrival of the big mills and required a large labor force to maintain operations. Bend became a boom town as the mills became operational. Later other big mills came to Central Oregon and began operating in Prineville and Redmond as well as Gilchrist. For several decades the mill and timber operations were the base of local economy.
Eventually the timber industry began to fade in Central Oregon and has dwindled to only one mill operation continuing in the region.

Local historian Steve Lent from the Bowman Museum in Prineville has gathered together historic photos and provided a visual and narrative program on the rise of the timber industry and its boom years in Central Oregon. Several rare old photos of the logging and milling industry help illustrate the importance of the industry to the development of the region.

The Rise of the Livestock Industry in Central Oregon

Bowman Museum historian Steve Lent will present a visual program showing early ranches and ranching operations of Central Oregon. Many rare photos will help illustrate the importance of the livestock industry in the region.

Central Oregon was late to be settled as limited mining activity did not occur in the region. Many travelers passing though the area recalled the lush grasslands that were ideal for livestock. Many of these early travelers were determined to bring livestock from the Willamette Valley to the relatively untapped ranges of Central Oregon. 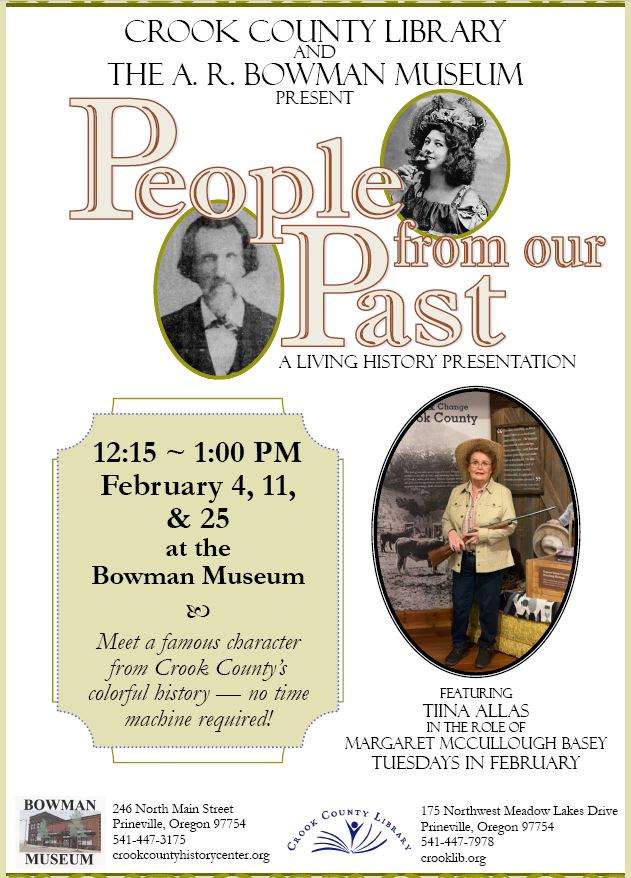 On-going Series Features People from the Past

From cowboys to can-can girls, madams to ministers, craven opportunists to pious emissaries of civilization, Crook County was built and settled by colorful characters. Now, for the first time, modern-day folks can chat with a few of these historical figures – no time machine required.

A partnership between the Bowman Museum and the Crook County Library, People of Our Past will bring a historical reenactor to the museum’s community room every Tuesday (times may vary -- see poster for details). Participants are encouraged to bring a lunch and learn about a figure from Crook County’s distant past.

The idea for People of Our Past came out of a successful event held at the Bowman Museum during the Library’s 2018 Summer Reading Program. Titled Night at the Museum, that program featured multiple reenactors and storytellers, some drawn from Prineville’s Ochoco Players theater troupe. Night at the Museum drew a crowd of about 80 attendees of all ages and represented a new kind of collaboration between the library and the museum – one that both organizations were eager to continue and build upon. “We were already having a lot of success with the Saunders Lecture Series and May at the Museum programs, which are co-sponsored by the Friends of the Crook County Library,” said Assistant Director of Library Services, Jane Scheppke. “We were interested in trying out something creative and collaborative that would appeal to all ages and take advantage of local talent. Our first attempt went so well that we had to keep that momentum going.”

“It has been my experience that living history presentations are one of the most effective ways to engage visitors,” said Bowman Museum Director, Sandy Cohen. “It is our goal to both educate and entertain, and this approach affords us the opportunity to do both. It’s especially great that Prineville has such a rich history of characters to choose from. We’re excited!”

The library and museum plan to continue People of Our Past through the month of May. Future programs will see appearances by early homesteader Alice Day Pratt and vaudevillian/philanthropist Kitty “Klondike Kate” Rockwell.

For more information about this series of free programs, please contact Adult Services Librarian Amber Smith at (541) 447-7978 ext. 315, or Museum Director Sandy Cohen at (541) 447-3715 Located in Prineville, The Bowman Museum gathers, preserves and makes available museum records and other material relating to the history of Central Oregon. The Bowman Museum stimulates an interest in, and knowledge of, local history. To learn more visit us at www.crookcountyhistorycenter.org.

Crook County Library provides traditional and innovative library resources and programming to Crook County residents of all ages. It is an environment where people come together for lifelong learning, enjoyment, and connection. To learn more, visit them at www.crooklib.org. 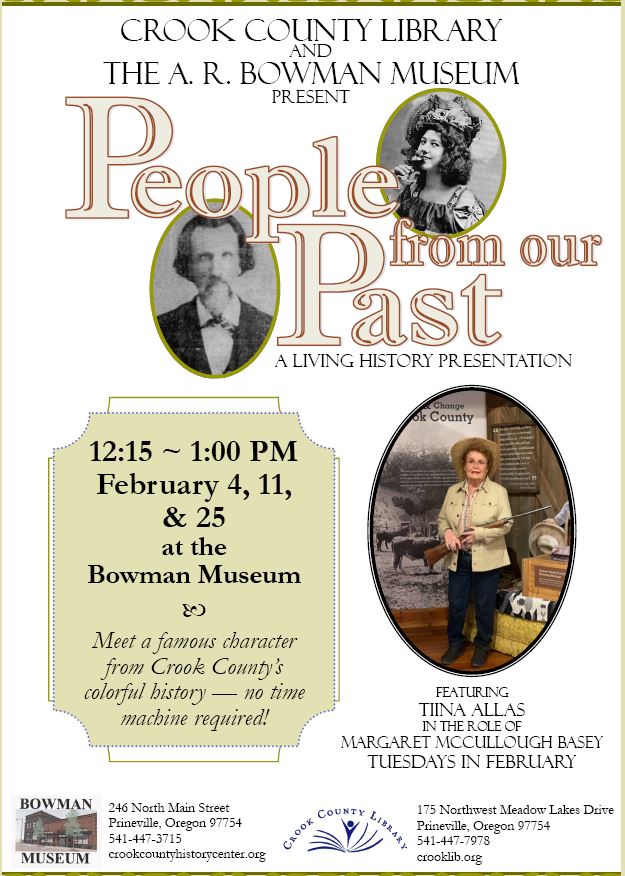 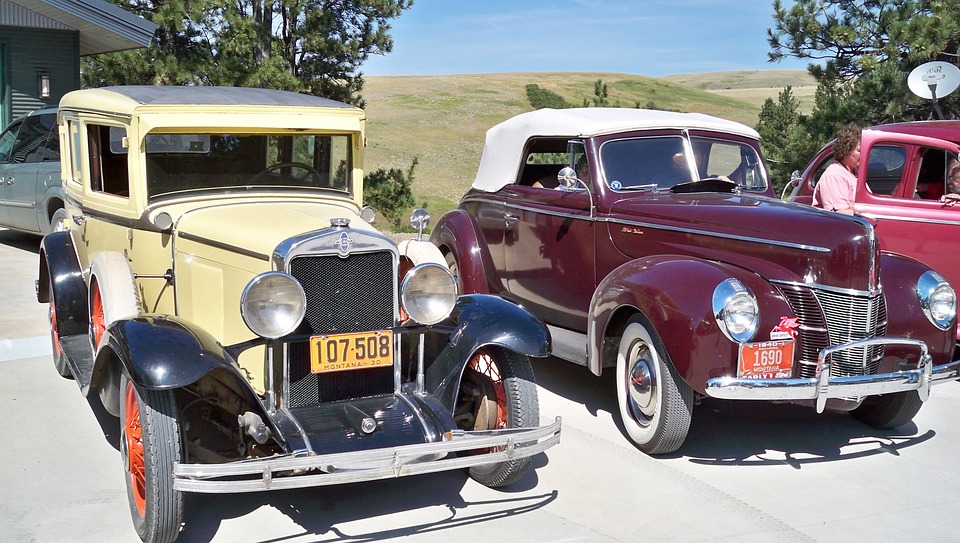 The A. R. Bowman Memorial Museum strives to offer new and interesting exhibits that are relevant to the Crook County community.

New exhibits will be set up at Bowman Museum for one year, displaying a comprehensive history of the automobile and the history of the Crook County Rodders Club, including its trophies and charitable work.

The museum's community center, The Crook County History Center, offers permanent exhibits that tell Crook County's story — including local Native Americans, homesteaders, timber, ranching and farming history, as well as Les Schwab's story. In addition, this space offers a temporary home for informative traveling exhibits and other displays. A new exhibit from the Crook County Rodders will soon be open for visitors to enjoy, beginning Feb. 1.

"They have agreed to come in and build their own cases for this, and also write the copy (for the history)," museum Director Sandy Cohen said.

He added that the display will be in place for approximately one year, and it will have one display case that gives a comprehensive history of the automobile and another that depicts the history of the Crook County Rodders Club, including its trophies and charitable work.

The Crook County Rodders have raised and donated approximately $34,000 at various events, all of which has been used to better the local community and for national organizations that support military members and first responders and their families. "We like doing that," Arnett added.

Some of the projects the club supports include fundraisers for Stryder Doescher, a local child who had medical conditions including epilepsy, connective tissue disorder and congenital heart defects. The group raised money to help purchase a service dog for Doescher, as well as a van to help transport him, his wheelchair, dog and oxygen tank to doctor appointments. Crook County Rodders also supports 4VR RIP, a national organization dedicated to restoring unfinished classic vehicles left behind by servicemen and women and first responders who are killed or wounded in action.

"It's a great hobby for lots of us folks, but our club tries to do more with giving back to the community, so I think that's one of our advantages," Arnett said. Members of Crook County Rodders are building the display cases, working to finish them before the exhibit's opening. The exhibit will remain for approximately one year. In addition, the club will have a classic 1934 Hudson Terraplane in the display room at the Crook County History Center for one week, prior to the Cruise to the Center of Oregon car show in July.

Read this article online at the Central Oregonian website. 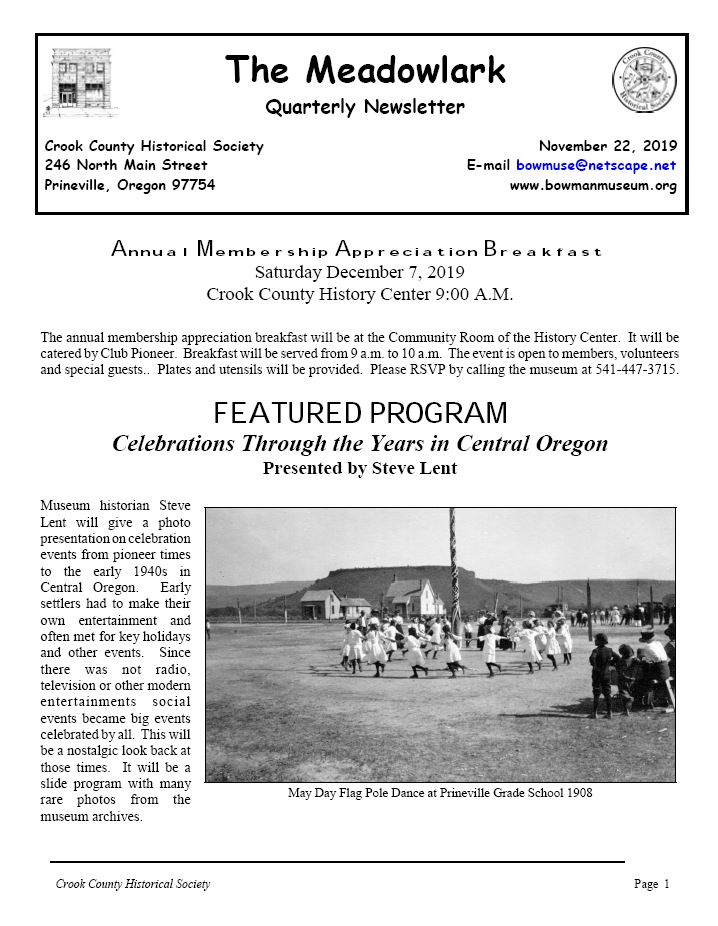 The annual membership appreciation breakfast will be at the Community Room of the History Center. It will be catered by Club Pioneer. Breakfast will be served from 9 a.m. to 10 a.m. The event is open to members, volunteers and special guests.. Plates and utensils will be provided. Please RSVP by calling the museum at 541-447-3715.

Museum historian Steve Lent will give a photo presentation on celebration events from pioneer times to the early1940s in Central Oregon. Early settlers had to make their own entertainment and often met for key holidays and other events.Since there was not radio, television or other modern entertainments social events became big events celebrated by all. This will be a nostalgic look back at those times. It will be a slide program with many rare photos from the museum archives.

Get the Meadowlark Here 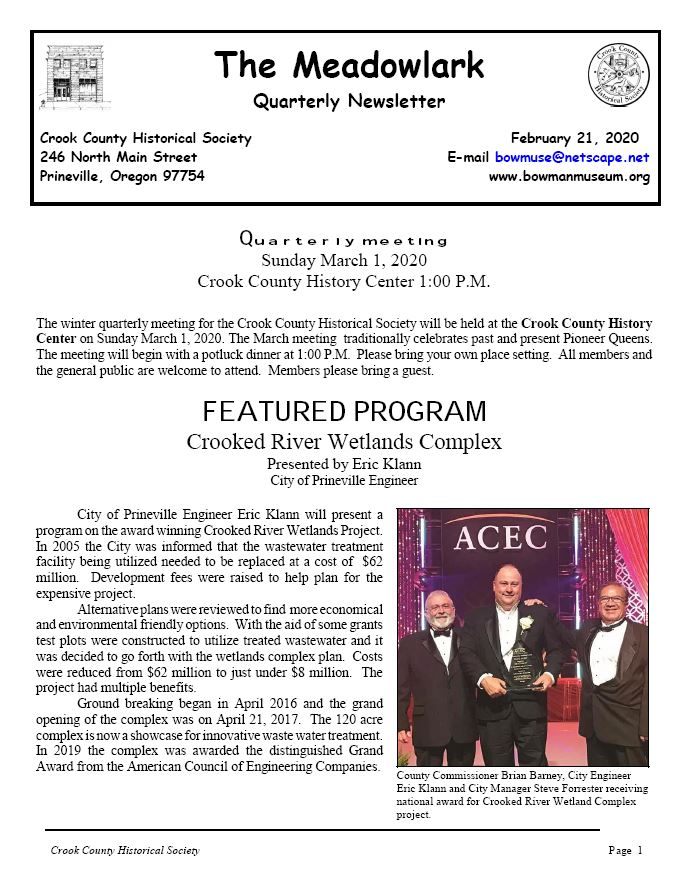