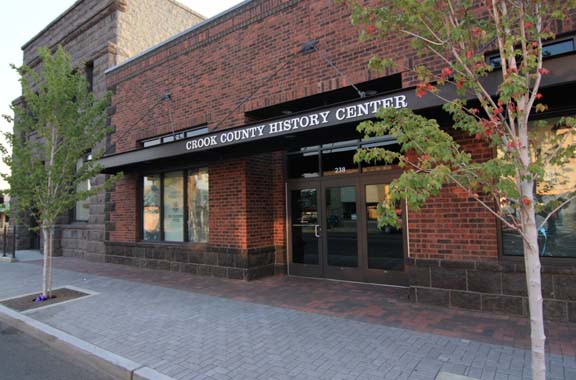 Launched in 1971 through the generosity of the Bowman family and newly expanded through the contributions of hundreds of community members and supporters in 2012, A.R. Bowman Museum serves more than 10,000 students, scholars and visitors each year.

The Bowman Museum is operated by the Crook County Historical Society, which was founded in 1969 to preserve and promote understanding of the history of Crook County.

In 1971 the A.R. Bowman family boosted the Historical Society’s efforts when they donated the Crook County Bank for use as a museum. A Kansas native, civic leader Arthur Ray Bowman served as Crook County Judge and promoted initiatives creating the Ochoco Irrigation District, the Prineville Airport, U.S. Highway 26, and the Crooked River Project, which today includes the A. R. Bowman Dam.

Through generous public and private support the Bowman Museum has created a vivid collection of pioneer history and organized programs serving more than 10,000 people annually. In 1991 its building was entered on the National Register of Historic Places. In 1996 it hosted the first Smithsonian exhibit in Central Oregon. In 1997 it won national recognition from the Institute of Museum Services.

Today, in addition to hosting students and visitors, the Bowman Museum publishes books and field guides, presents a lecture series, conducts historical field trips, and through the Internet links its collection with museums and libraries throughout the world.

Telling our community’s story since 1971

Since the creation of the Bowman Museum in 1971, generations of Central Oregonians have contributed time, money and family heirlooms to help tell the history of their county. With our region changing faster than ever, it became imperative to expand Bowman Museum.

The Bowman Museum is now better able to bring Central Oregon’s history to life for thousands of students, community members and tourists. School children visit for hands-on and eye-opening learning. Scholars and researchers scour our historical and genealogical library.

Community members participate in lectures and scramble high desert trails on our field trips. Visitors buy our books and view exhibits … deepening their understanding of our region’s resources, economy and people.